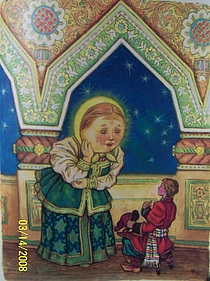 Om migI really love my books, and cataloging them has lead to some interesting discoveries. Mainly, the number of books which are unique to my collection is staggering, or does everyone think that, and notice the same thing with their libraries, I wonder? Occasionally I'll check on some of these unique treasures, to see if maybe another LTer has listed it. I've collected most of my books in the last fifteen years, as a result of teaching my kids myself, and wanting them to have good books around. I do have some older books from my childhood, that I am thrilled I still have for their own sakes, and to share with my children. A reminder of how to post an image:

because if I don't put it somewhere I'll forget how to do it.

Om mit bibliotekLots of Catholic books, or with the Catholic tag. Lots of children's vintage fiction and non-fiction "living books", illustrated by inspired illustrators. I have quite a few books of Norwegian folk tales, crafts, and customs; books by Norwegian authors, mainly Sigrid Undset. Lots of English village novels by authors like Miss Read, Angela Thirkell, Margery Sharp, and Rumer Godden, and my husband's Patrick O'Brien's. Now I am going through my books yet again, to find the best of the best, and pass on the rest, so my collection will not be so unweildy, as in taking over the house.

In August 2013 I started a second LT account, StSimonJude, to collect the unique covers I have uploaded here.