The Summer 2021 folio magazine contains a "sneak peak" (yes, I know) of part of an image for a forthcoming release. What's in the bottle, I wonder? 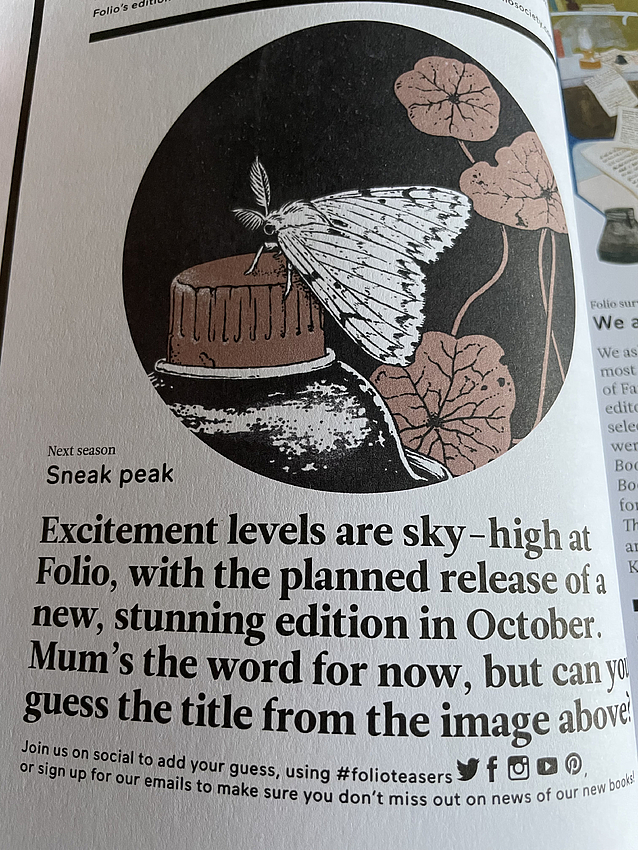 The Silence of the Lambs?

Could it be the long awaited facsimile of Benjamin Wilkes' 1747 classic "The English Moths and Butterflies: Together with The Plants, Flowers, and Fruits whereon they Feed, and are usually Found", bound in series with the Herefordshire Pomona?

So, a moth on maybe an aerosol can cap?

I would be most pleased if this were true, but I don’t think that’s it sadly...I hope I’m wrong.

A Moth in the Country?

The bottle and the moth might work for Silence of the Lambs. Does anyone know what kind of plant this is? Does it connect to the novel, too?

>7 SF-72:
It looks like it could be nasturtium to me, but no idea if this would have any connection to the book.

The Moths and other stories
by Helena Maria Viramontes, or ..

Mothman : Behind the red eyes

Canary and the mothman

The coming of the mothman

Moths : A complete guide to biology and behavior

Searching Silence of the Lambs + nasturtium came up with this excerpt from Hannibal, "Dr Lecter placed the browned brains on broad croutons on the warmed plates, and dressed them with the sauce and truffle slices. A garnish of parsley and whole caper berries on their stems, and a single nasturtium blossom on watercress to achieve a little height, completed his presentation."

Silence of the Lambs had the Death Head Hawk Moth, so although possible, most likely not. I can do no better with my guesses though!

>11 adriano77: Yes, I just found that too! It was quoted in a paper about Silence of the Lambs. I've never read the book or seen the film, but inferred from the paper that this excerpt is from a fairly significant scene in the book so... could be alluding to that?

>2 chrisrsprague: The Silence of the Lambs would be wonderful!

Far be it for me to cast nasturtiums, but the text had me hoping for Robert Bloch's Psycho. I can't help feeling that sky-high excitement levels could be a clue too?

This is so much more entertaining than a stack of books with their spines turned away from you (imho).

How about “Moth”, by Isabel Thomas. Illustrated story book about how a Moth tries to survive in an increasingly human world (natural selection and all that). That could tie into the aerosol trying to kill it.
An LE with lots of pictures, would give Folio the opportunity to go crazy with artists again.

Really hope not Psycho or Silence! But I have no idea.

Doubt it, to be honest. Moths are a thing from Silence of the Lambs, the nasturtium mention from Hannibal is just Dr. Lecter's culinary pretentiousness.

>18 adriano77: Ah, I must have misread as I thought the excerpt was from Silence of the Lambs, not Hannibal (I admit I was just quickly skimming the article). If it's only mentioned in the other book then yes, it does sound less likely.

I can't help but immediately still think it is Silence of the Lambs. We have been getting a lot of horror/thriller titles over the past few years. The bottle could be from "It puts the lotion in the basket" line and the moth could be just one of the many various moths and butterflies he had fluttering around his hidden home. Maybe the Dead Head Hawk Moth may be in the picture, but not shown here to make it such a "dead" giveaway! If it is, I am going to guess it will be a hot seller!

The death's head moth from "Silence of the Lambs", looks totally different than the one in this image.

>24 Eastonorfolio: yeah agreed....that’s why I don’t think it’s Silence of the Lambs. But the lotion bottle comment does make it a little more likely and maybe this is just a teaser.

Are “stunning editions” going to replace Standard Editions as SEs or fit somewhere between fine edition and limited edition? For that matter do the standard limited editions with signature count as SEs? I’m glad I’m not a bibliographer.

Perhaps 'stunning editions' are for throwing at posters who go wildly off-topic?
;-)

Thank you for identifying the plant and finding the reference.

Interesting thoughts on the nasturtium (it would certainly make sense), and also the moths. It will be interesting to find out whether it's actually Silence of the Lambs or something else.

To me, this would be a title that's very sure to sell well, and where they would want to tease it and create a wide interest in advance. Silence of the Lambs was one of the fastest sellers for Suntup and I'm pretty sure that people have requested it from FS for quite a while. If this should be it, I would have preferred them starting in order with Red Dragon, though.

>14 fiascoborelli: “I can't help feeling that sky-high excitement levels could be a clue too?”

Agreed. I think “sky-high” is a definite clue.

Curiosity may have killed the cat, but…

I started googling books related to butterflies (yes, I know the picture is of a moth) and eventually came up with this: The Collector by John Fowles. I know absolutely nothing about this book or its author except what I’ve read on Wikipedia, but he seems to be an author of some note.

And if “sky-high” is itself a clue, could it refer to the author’s name Fowles (=birds)?

Being released in October before Halloween could be another clue in favor of Lambs.

I would love for it to be “The Collector”. If you have never read it I do recommend it, if you are interested in in seeing the descent of a person who was a bit of loner and each step he took to being something more.
It is also interesting as you get the narrative from the view of both the victim and culprit.

Unfortunately I do not think it will be this book though.

I feel like since it’s being hyped on social media, it has to be something trendy. I love Fowler (though same as Silence of the Lambs do not like books about serial killers/disturbed men preying on women).

I feel like if they were going to do Fowles they’d probably do The French Lieutenant’s Woman first as it was probably his most popular. I’ll keep asking for The Magus though but I’d be happy for it to be the collector but I think people are right that because they are hyping it up it will be a more well known popular book.

How about The Moth Catcher by Ann Cleeves? Going on Folio's trend towards more popular fiction this could tick the boxes. Agatha Christie, Dorothy L. Sayers, and Margery Allingham have all sold well. Now's the time for more contemporary crime. The 'Vera Stanhope' novels have been adapted for TV and are popular in both the UK and US. The latest TV series is split, with a couple of episodes in 2021 and the rest in early 2022, so an autumn launch for the Folio book will chime in nicely with fans needing a fix. If all goes to plan, there are more books to draw on. . . .

>27 Cat_of_Ulthar: I would not call that "wildly off-topic" haha. "Stunning edition" is in the title of the post and he does actually bring up a good point. Does stunning edition mean we can expect something more special than a standard?

Moth catcher sounds likely. Or what about Atwood's Year of the Flood?

>26 BionicJim: >38 Clobby: The words "stunning edition" in the Folio magazine are all lower case, whereas I think they normally refer to an official Limited Edition or Collector's Edition with a capital letter at the start of each word.

Judging by the quality of the illustration, then "stunning" does not seem to be an appropriate adjective. Unless the brown is gold leaf.

lol, I wasn't accusing anyone of anything. This thread has actually stayed pretty much on-topic, unlike some others.

I was merely making a play on words: punning on 'stunning' :-)

>42 Cat_of_Ulthar: Ah I see! That makes more sense. I suppose I let the recent thread about off-topic banter mingle with my thoughts. I felt like I needed to defend Jim haha.

>26 BionicJim: >38 Clobby: >40 fiascoborelli: Indeed I wouldn't read too much into it - otherwise we'd also have to include: striking, awesome, phenomenal, gorgeous, charming, ultimate and collector editions.

>42 Cat_of_Ulthar: “Punning on ‘stunning’ :-)” I enjoyed the pun and was stunned into silence instead of picking up the book and throwing it back, which really could’ve escalated into I don’t know what.

>43 Clobby: “I felt like I needed to defend Jim” Thanks for the good intentions. My takeaway from the other thread was probably similar to yours in that naturally allowing the topics to flow is more interesting and can lead to great discussions.

>44 clymbouris: “I wouldn’t read too much into it” Yes, this is ultimately my conclusion, too, though I am genuinely not sure if the so-called “stunning edition” will be an affordable SE or something higher up the ladder.

Also, I was stirring the pot on the oft-discussed opinions of many devotees regarding the perceived improvement (or lack thereof) of some of the recent books FS has sold at a premium price.

It’s been top-of-mind for me recently as I’ve been reviewing the history of the Limited Editions Club. Eighty years ago, John T Winterich made a point about the phenomenal success of this club (its first book was published in 1929 and released the same day in October the stock market crashed, but they quickly filled-up all membership slots and maintained them throughout the Great Depression), which I think is relevant about limited editions:

“The most damaging aspect of the limitations racket of the 1920’s was that generally the buyer did not get his money’s worth. Usually the limited edition differed from the trade edition (uncouth vulgarism!) only in respect of quality of paper, size of page, binding, and (if the author could be made privy to the plot) the author’s signature. Yet for these sketchy distinctions the customer was asked to pay from two to ten times the cost of the trade edition. And did.” From The Books as Literature - Ten Years and William Shakespeare - 1940

His analysis goes on to supply reasons the LEC differentiated itself and became a success; outstanding design, definitive content, choice of titles, and generally a contribution to cultural history. I think Folio Society generally meets many, if not most, of these criteria in the books they publish, so await with anticipation this latest “stunning edition.”

Agree with that! I love the series, and think it would make a great folio set. Red Dragon would be fantastic! I'll try not to get my hopes up for SOTL but it would be an instant buy for me.

Could be A Girl of the Limberlost. There's a lot about catching and preserving moths in there.

It's a stretch, but I wouldn't be surprised at Silent Spring.

I tend to think not, given it was published by Folio in 2000 and didn't get a rapturous reception then, as far as I recall. But who knows ... ?