Available late May 2021, No price details. From the Folio Magazine Summer 2021/

>1 folio_books: Can you please post a photo of the set?

I assume it will be in the format of the other LE poetry books?

It hasn't been published yet.

No idea. Aside from the War Poets, is there a format for LE poetry?

Hardy wrote some influential WW1 poetry, so I suppose a selection from that might be produced in line with the WW1 series, though his war poetry was a small part of a large oeuvre. The variorum edition runs close to a thousand pages. Therein lies the problem for me. We're likely to get a small selection of the anthologised stuff with emphasis on what inspires an illustrator, rather than a substantial companion for a Hardy lover. The sort of approach that made Eric Ravilious cry off illustrating for Golden Cockerel.

Oh I hope this is true. Selection or complete an instant purchase for me.

Hopefully, the LE edition of Hardy's poetry will NOT be part of the War Poets series because his poetry is S-O-O-O-O-O much more than that. FWIW, Hardy considered himself, first and foremost, a poet and wrote his novels because they were more popular and provided a means of financial support for his first love - writing poetry. Many (Hardy included) consider Hardy's poetry even finer than his exceptional novels. It would be a keen disappointment if the LE edition did not include a wide and varied range of his poetry.

They published Poems by Thomas Hardy in 1979.

>5 Jayked: 1000 pages of most any poet is probably a tad too much for me!
Looking forward to a good selection of poetry - after starting The Complete Short Stories of PKD I am of the opinion that in general there can definitely be "too much of a good thing" :)

>7 dlphcoracl:
I was about to write the same thing. I always thought there were a lot of similarities between Thomas Hardy and D H Lawrence, who also considered himself a poet first. I always liked Snake, by Lawrence.

If the content is different than the older version (which I treasure!), then I’ll most likely be getting it.

Oh my god. I don't know how to feel about this. On the one hand, Hardy is one of my favourite authors, on the other, I never thought I would want to buy a poetry book as an LE.

But eitherways, this is really good news. I wish it had come out as an SE. I always wanted his poetry in a nice volume.

I love poetry books. This is an LE that definitely interests me.

having received the magazine today, where there are a few pages dedicated to this book, I think it will be a must have LE. I'm not even a huge poetry fan (although I do have war poets LE's) but the Stanley Donwood illustrations look great

Can anyone provide a link to the Folio Summer Magazine 2021 to read the brief mention of the forthcoming Thomas Hardy LE?

I leant upon a coppice gate
When Frost was spectre-grey...
And Winter's dregs made desolate
The weakening eye of day.

What a downer, but also...what a poet!

For anyone interested in acquiring a beautiful private press edition of Thomas Hardy's poetry.............

>16 dlphcoracl: I’m not sure if you’re still looking, but what I saw was on Facebook, and there was a photo saying it was going to be released in late May, so maybe another week or two. It said Robert Macfarlane in the caption; I imagine he edited it.

Thank you. I’ll check it out.

>19 WishIReadMore_: A Macfarlane/Donwood collaboration on Hardy sounds really enticing (Donwood illustrates the covers for most of Macfarlane's books, at least in the UK) and is a very likely buy for me. Fingers crossed they give it the full fine press treatment, as they did for the war poets.

Somewhere on the internet, an interview with Donwood:

"Whats the latest with the Thomas Hardy stuff.

Yes, I’m working on a load of pictures to illustrate the poetry of Thomas Hardy, lately of Dorchester, England. He’s been dead for a long while, so he can’t object to my interpretation of his oeuvre. The edition will be published by the Folio Society, so it’ll be well fancy."

And this is the guy who does cover art for Radiohead albums, yes? Or am I getting confused?

His website: https://www.slowlydownward.com/ is worth a visit. Interesting work across a variety of media, and lots of trees and stuff drawn from nature. I think he'll be a great fit - which given my taste in art seems to send most FSDs screaming for the hills may not be a recommendation.

I'm happy they're doing another poetry collection, and as others have said hopefully it will be the same calibre as the War Poets series. Especially as that series seemed to have not done so well, even going on sale at one point.

Shown in the summer magazine 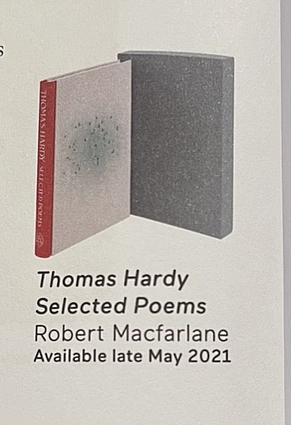 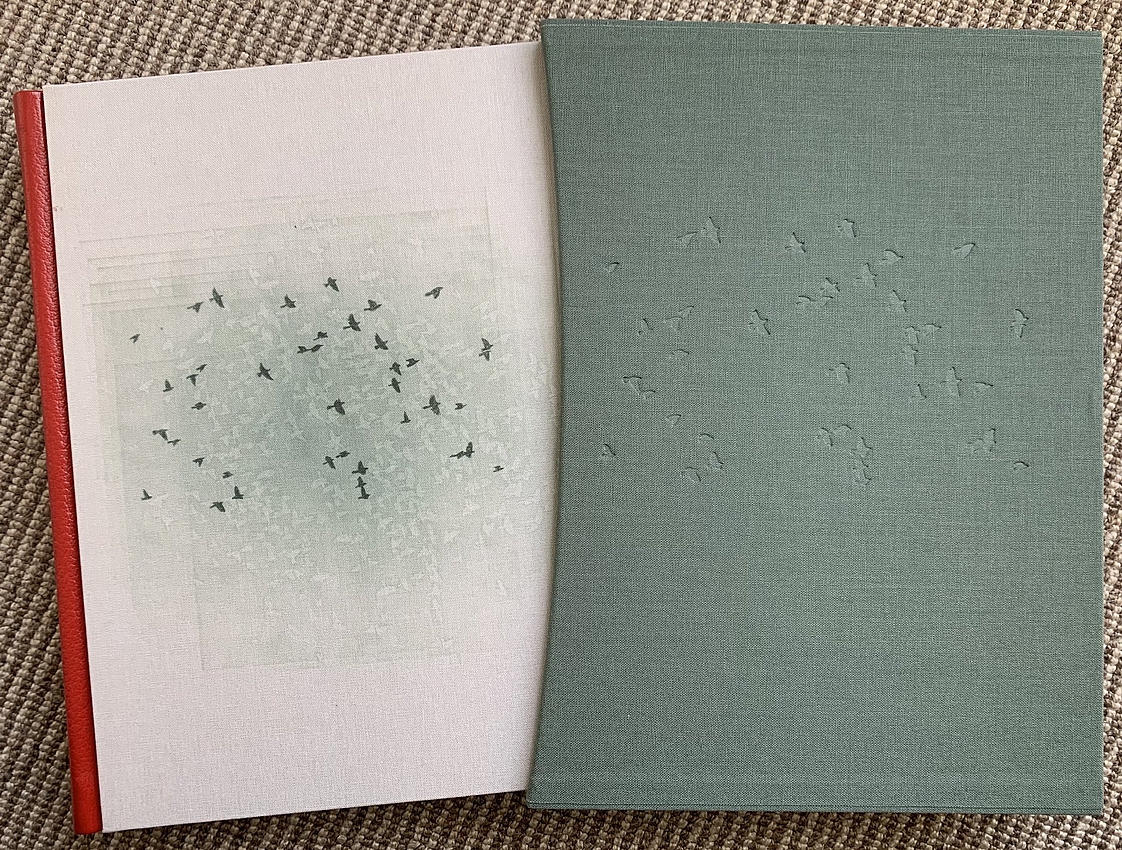 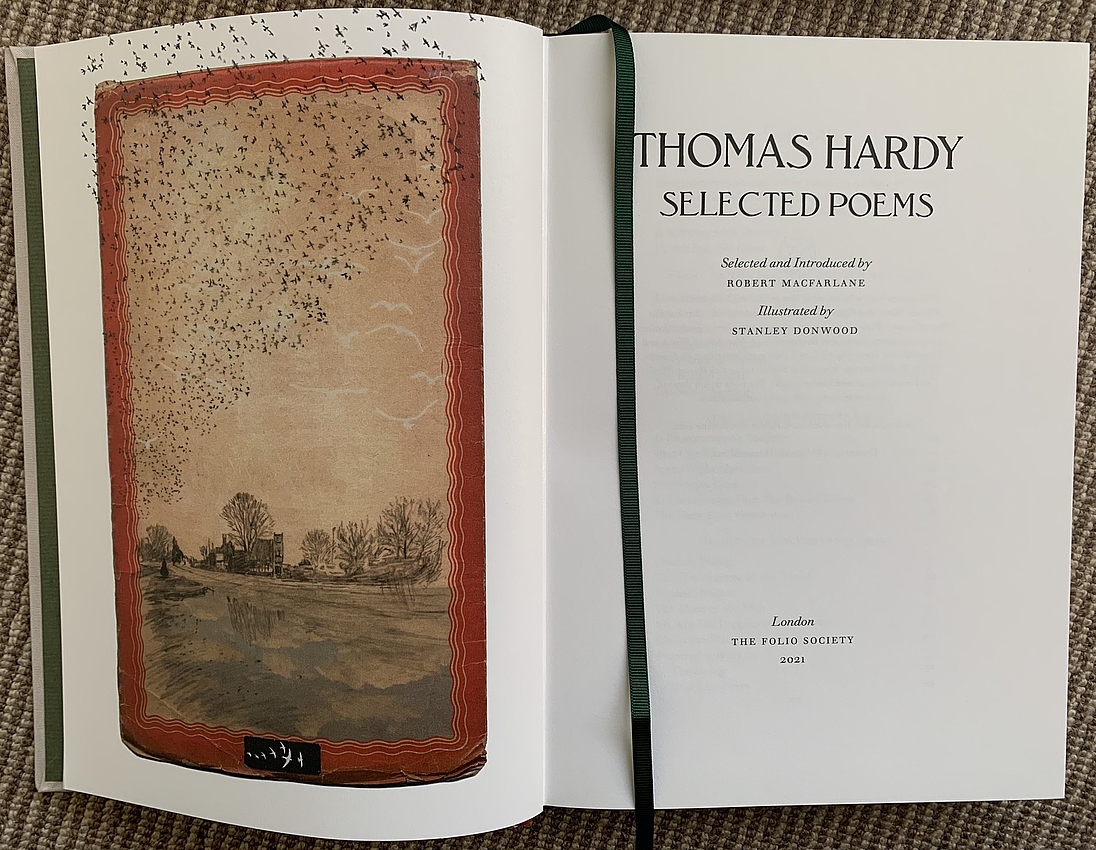 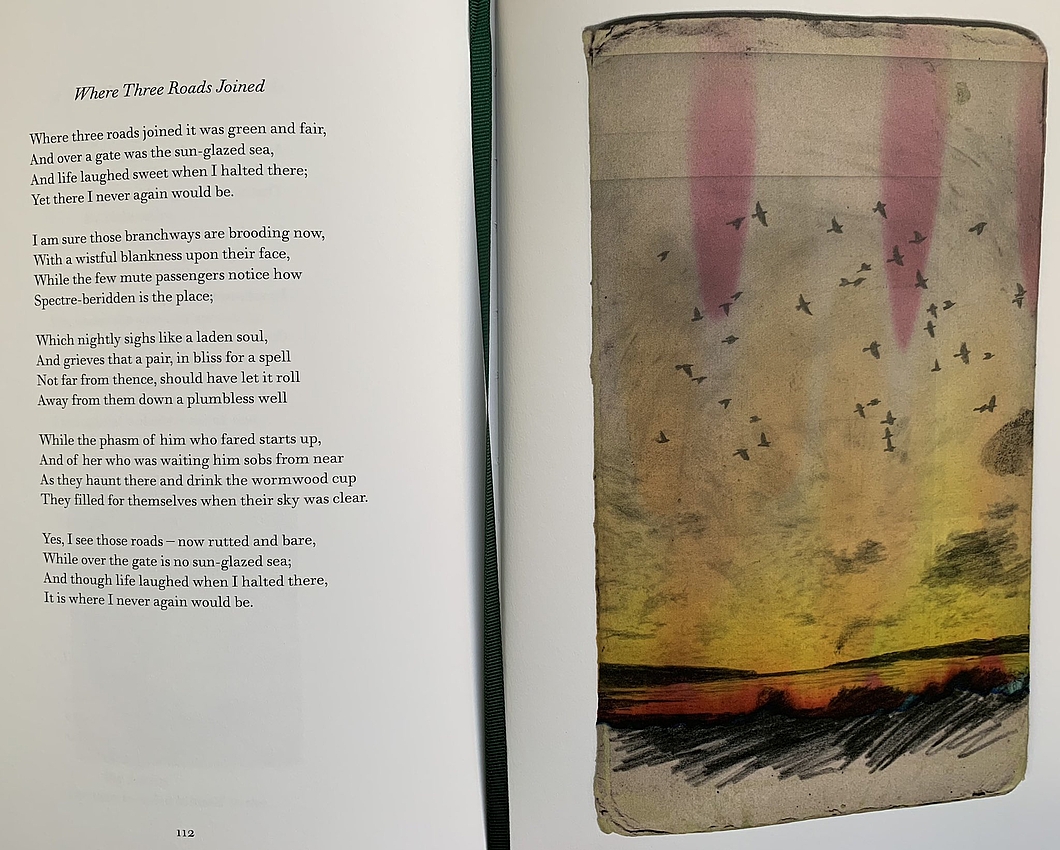 Very nice illustrations. I do hope it's letterpress.

Beautiful...my purchase will depend on cost and mainly whether the selection is considerably different than the older version, which I have and think is beautiful and perfect for Hardy’s work.

The poem visible above is not in the 1979 edition, which I agree is very satisfactory indeed - one of the best of the older informal series of Folio poets (Folio 60 description) which ran for over thirty years from the FS's earliest years.

There are a few more pictures previewing the art on Stanley's instagram (https://www.instagram.com/stanleydonwood), looks like the art is going on display which I might look in on.

Wow, that is pretty nice. I wonder how they feel about him letting the cat out of the bag that way.

Looks so beautiful. It will all depend on the price if I can actually get this.

As for the older edition, are there pics somewhere? I would love to see it in detail. Didn't find many on Google.

It's probably fair game as he's advertising an exhibition in a small gallery that people need to book slots for ahead of time. Looks like prints are actually already available on the Jealous Gallery website.

Noticed that he said there're seventeen pieces in total and that it will be released on the 25th. From what I can gather from his instagram, he's also illustrated The Last Signal, Under High-Stoy Hill, We Are Getting to the End, Wessex Heights, First Sight of Her and After, The Shadow on the Stone, and After a Journey.

>28 reticular: Very nice. Much more appealing to me than a neon PKD!

>34 WishIReadMore_: I have a feeling it was a calculated move on Folio’s part. Part of their newer sales strategy seems to be to drive up hype on social media. I’d be surprised if they didn’t ask him to post it, or at the very least, know in advance he would.

If this is letterpress and is somewhat compatible with The War Poets, it will be an instant buy for me.

>36 reticular: >37 ChampagneSVP: You’re probably both right. Just builds the anticipation and gives us more to talk about.

>39 WishIReadMore_: I like how the artist postings for Folio drives readers to their page, who otherwise wouldn't view an artist's feed, like me!

>39 WishIReadMore_: It’s certainly worked on me. My anticipation is very very high.

I’ve made it known before the war poets series is my favorite thing that FS has done. Even if this is not directly in series from what we’ve seen it will be exquisite and it’s heartening to know FS is still willing to publish works like this.

Oh let it be letterpress!

Wow, it looks lovely! Just a shame (personally) that it'll be an LE, I would have been delighted if it was roughy the same quality and value as If Not, Winter. As an LE though, I doubt I can justify the expense.

Shame too, I've been walking dogs in Thorncombe Woods, and walking past Hardy's cottage since I was a child, his poems were what got me into poetry.

>42 Xandian97: I'd be happy with a book as wonderful as If not, Winter which is basically like a Limited Edition in quality! I think the thing is, the artist is likely to sign this edition and of course that makes it a "limited edition" by default.

>43 astropi: I would be happy too! As long as there’s a notably different selection to the older collection, I’ll get it either way. I personally don’t care at all about artist’s signatures (or author’s signatures for that matter).

Good news! I was planning on buying it but Thornwillow just launched their kickstarter Song of Solomon which was a must. Hopefully it's not too expensive.

I have to say it looks absolutely gorgeous. I love the design and the illustrations look beautiful. But it is absolutely out of my price zone.

It is lovely but that is a letterpress price and I can't seem to find where it states that it is letterpress...

It says the limitation page is letterpress, so likely if the entire thing were, it would say so.

The bulleted feature list says it is bound in full leather, but clearly it’s not.

Other initial observation - there sure are lots of birds present in the illustrations.

>46 Joshbooks1: The “Ferocity of Beauty” half leather was too beautiful to pass up so that was a quick purchase yesterday. Today’s Folio LE certainly doesn’t help the wallet but the good news for those who want to wait is that it will likely be around quite a while before selling out. It’s lovely but I’m certain there won’t be a PKD-style mad dash for it.

Agree that that’s a lot of birds !

>51 ChampagneSVP: I got the early bird leather and the cloth, will decide which to keep (this is about the Thornwillow “Solomon” from Kickstarter yesterday).

>52 antinous_in_london: I almost think it’s deliberately misleading to say it’s “bound in full goatskin leather,” when that can so easily be misconstrued as “fully bound in goatskin leather.” Not a fan of that.

I also note that upon conversion of the GBP price, the Canadian price is almost $100 Canadian more expensive. Then the $80CAD shipping needs to be added, plus 5% for taxes.

All in cost to someone in Canada is almost $200CAD more expensive than someone in the UK!

>53 WishIReadMore_: I see they have changed the description now to clarify that only the spine is in leather.

Love the Letterpress. Maybe worth it. Never read Hardy but love poetry and appreciate that they are including signatures. Now only if I could decide on this or Herodotus.

>55 ironjaw: It's not letterpress

>49 L.Bloom: Just the limitation page is printed letterpress. Just realized that page is by Hand & Eye, whose completely letterpress edition of Wind in the Willows I am awaiting with butterflies reminiscent of those when I was hoping for a phone call from my steady in middle school.

Not sure I've read any Hardy, unless it was in an anthology somewhere. I'll go check a few of those and see what's what.

I don’t understand what the point is to include a Letterpress limitation page. I almost pulled the trigger thinking it was Letterpress.

>58 ironjaw: They're not the only one I've seen do this. It's just a little extra touch. I don't think the intent was to mislead anyone.