Favorite Passages
* The call and response of "Fired up ... Ready to go!" (p. 97)
* The origin of the Yes we can campaign slogan (p. 111)
* Obama choosing Biden as his running mate (pp. 162-165). I've lived in Delaware and Philadelphia most of my adult life; Biden has been "my Senator" and a familiar presence for years. Still, it was interesting to read about how he was chosen, and to consider how the VP role positioned him for 2020.
* And then, of course, the train wreck that was McCain choosing Sarah Palin (pp. 169-170), and the chapter's final paragraph:

It was, of course, a sign of things to come, a larger, darker reality in which partisan affiliation and political expedience would threaten to blot out everything--your previous positions; your stated principles; even what your own senses, your eyes and ears, told you to be true.

Events I Remember
* The grass-roots nature of the Obama campaign, and the way they seemed to own the use of social media and other tech to engage with the public.
* The Jeremiah Wright controversy. But at the time, I didn't realize Obama had "unequivocally denounced at and separated myself from Reverend Wright." (p. 147) How painful that must have been.
* The Obama family's appearance in Grant Park on election night. I choked up then, and choked up all over again reading about it.

First impressions. Flat-out interesting. I still feel like President Obama is in the room with me in a comfortable chair talking to me. An intriguing thought – as apparently open and honest as this is, what isn’t being said about the campaign, the people who worked for him and volunteered for him, his first few months as President?

P 82 a comparison to Trump, on purpose?

“My staff’s biggest fear was that I’d make a “gaffe,” the expression used by the press to describe any maladroit phrase by the candidate that reveals ignorance, carelessness, fuzzy thinking, insensitivity malice, boorishness, falsehood, or hypocrisy – or is simply deemed to veer sufficiently far from conventional wisdom to make said candidate vulnerable to attack.“ 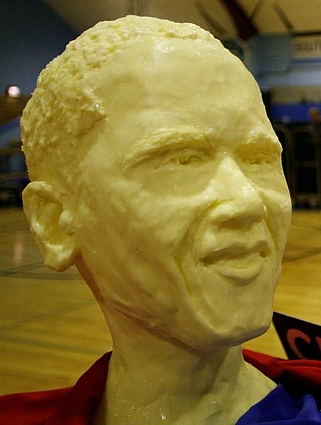 Palin’s nomination was troubling on a deeper level. I noticed from the start that her incoherence didn’t matter to the vast majority of Republicans; in fact, anytime she crumbled under questioning by a journalist, they seemed to view it as a proof of a liberal conspiracy. I was even more surprised to witness prominent conservatives – including those who’d spent a year dismissing me as inexperienced, and who’d spent decades decrying affirmative action, the erosion of intellectual standards, and the debasement of Western culture at the hands of multiculturalists – suddenly shilling for Palin, tying themselves into knots as they sought to convince the public that in a vice presidential candidate, the need for basic knowledge of foreign policy or the functions of the federal government was actually overrated. Sarah Palin, like Reagan, had “good instincts,” they said, and once installed, she’d grow into the job.

President Bush had authorized Paulson to brief both me and John McCain because further emergency actions would need bipartisan political support. Paulson hoped that both campaigns would respect and respond appropriately to the severity of the situation.

“With America’s global economic dominance unchallenged, its foreign policy defined by the unifying threat of communism, and its social policy marked by a bipartisan confidence that women and people of color knew their place, both Democrats and Republicans felt free to cross party lines when required to get a bill passed. They observed customary courtesies when it came time to offer amendments or bring nominations to a vote and kept partisan attacks and hardball tactics within tolerable bounds.”

Events I remember myself: To this point in the book, early in 2009, I’m still basically flat out busy with the business of working/wifing/mothering/volunteering. I was thrilled beyond belief when he and Biden won but didn’t watch Election night or the Inauguration. I was less inclined to follow the news because I trusted that my political party would try to get the things done I wanted to get done and I wouldn’t have as much need to be indignant or distraught over what was happening.

I remember being somewhat disturbed about the Jeremiah Wright controversy but trusted that Obama wasn't in the thick of the belief system of Wright.

Since my husband, who was in the Navy from 1976-1982, constantly critiques Presidents on their salutes, I was highly amused at Obama's working on his salute. I appreciate the impressions of his first few months as President, both personal, as Commander in Chief, and as the person who inherited so many problems from his predecessor.

Gruppe: One LibraryThing, One Book