THE DEEP ONES: "A Study in Emerald" by Neil Gaiman

THE DEEP ONES: "A Study in Emerald" by Neil Gaiman

"A Study in Emerald" by Neil Gaiman 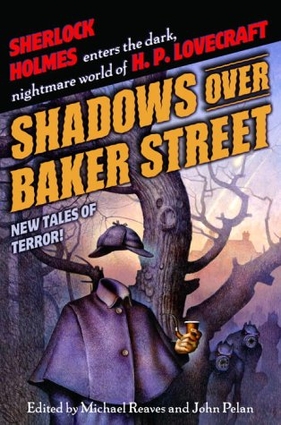 Apologies! The flu and a snowstorm causing a three-day school vacation for my six-year-old caused this one to slip by. Time to catch up!

This story was just great fun. Can't think of the last read I found so outright enjoyable, even mid-story I was almost giggling to myself at the world Gaiman built.

Love the concept of Royal Families, though the passing mention of half-bloods is perhaps one of the most horrifying aspects of Gaiman's vision. Is there any hint that HPL envisioned miscegenation with Old Ones in his tales?

I read the online PDF, and Koponen's period adverts were appropriately funny as well as bringing some Victorian culture to bear. My fav was either the Spring Heel Jack reference or Jekyll's Powders. I got most of the references, but not V. Tepes (exsanguination). Interesting that the first advert for the Strand Players contributed to the story so directly, whereas the others could easily be done without.

In retrospect it seems so obvious, but I didn't get the switch in protagonists until the end. I've read some Conan Doyle stories, and noticed that the narrator was not named. But vaguely recalled that Watson was an Army surgeon, and thought that accounted for the focus on his service in Afghanistan. Maybe that was telegraphed more specifically than I thought, and just missed it. It all fit together so well, very satisfying, though I noticed after a quick Wiki check on Moriarty that Gaiman has Sebastian Moran sign the narrative as a Major, rather than a Colonel.

>3 elenchus: Is there any hint that HPL envisioned miscegenation with Old Ones in his tales?

I think this story is exemplary for it's world-building in such a brief format. Of course, it helps that it's leveraging the existing mythoi of Homlesiana and Yog-Sothothery. The board game of the same name (really two games, since the second edition differs significantly from the first) goes even further in elaborating a setting where the stars have been right, and the end of the long 19th century is the peak and possible decline of praeter-human monarchies opposed by human "Restorationists."

I keep a hardcopy of the pdf edition in with my copy of the (second edition) game. I too love the formatting and the mock adverts, even if they weren't part of the story as originally written.

Clearly I need to re-read!

I think of the worship of Old Ones and sacrifice of said worshippers, but not interbreeding. And I assumed the gilled humanoids to be a different species, not the result of interbreeding!

>6 elenchus: I assumed the gilled humanoids to be a different species, not the result of interbreeding!

That's "The Shadow over Innsmouth," where "miscegenation" between humans and deep ones is certainly an issue, but whether the deep ones themselves are the result of interbreeding (antediluvian experiments by Cthulhu and his kin, perhaps) is not an issue approached in the story, I think.

This was another re-read for me. This was a, probably the, stand-out story in Shadows over Baker Street in my opinion. I agree with elenchus about the sheer enjoyabilty of this, and the depth of the imagined world that's barely hinted at (I didn't know about the subsequent board game).

I can't remember at what point, on my first reading, I realised the true situation with the paired protagonists and antagonists (the name "Sherry Vernet" is a big clue for anyone who's read the Holmes stories and a little background, however - in one of the stories it's revealed that Holmes is related to "Vernet, the French artist" through his mother and "Sherrinford" was a name Doyle considered for Holmes - later writers giving him an older brother of that name).

By the way, in the book the story's divided into short chapters, and the adverts appear as epigrams at the head of each chapter. I assume that the text is Gaiman's and was always a part of the story. The adverts are not illustrated, however.

In the months since I nominated this story, I've done some reading that dovetails with it rather eerily.

First, there was Michael Chabon's short novel The Final Solution, another Holmes story where Holmes is never named. (And we've read Chabon's superlative "God of Dark Laughter" in this group.) Chabon's Holmes tale is also a horror story of a sort, but instead of Gaiman's alternate universe, it is set with grim immobility in our own.

Second, there was Eros, Magic and the Murder of Professor Culianu. Although I was familiar with Ioan Culianu's scholarly work before reading this biography and study of his unsolved murder, it was reading this book by Ted Anton that introduced me to Culianu's aspirations as a fantasy fiction writer, and the fact that "emerald" was a key motif in his correspondence with his fiancee and occasional co-author Hillary Wiesner. They wrote a murder mystery novel (with abundant esoteric content) called Jocul de smarald (The Emerald Game; alas, no published English edition seems to exist). Culianu was also a Borges fan, especially obsessed with the story "Murder and the Compass," although he must have at some point read "There Are More Things."

"Emerald" is a terrifically over-determined element in the title of this story. It is a perfect chromatic complement of the "Scarlet" in Doyle's original title, and--pursuing the parallel--represents the substitution of the green ichor of the non-human royalty for conventional red blood. But The Emerald Tablet (Tabla Smaragdina) is one of the cornerstone texts of the hermetic tradition, and its "Study" is a shout-out to occultism.

The switch in protagonists worked exactly the same for me on first reading. I'm sure Gaiman constructed it with that aim. The fact that the story first appeared in a collection of Sherlockian Yog-Sothothery meant that readers could reliably be suckered by standing assumptions of Watson as narrator, and Holmes as his hero.

>10 paradoxosalpha: readers could reliably be suckered

The mark of a successful Yog-Sothothery tale, to be sure.

On this third reading of the story, I put my finger on a nagging problem I have with it. It doesn’t really take its premise seriously, its just a tale of comic inversion with Holmes and Watson being renegades and displaced from their familiar role. Gaiman eviscerates the real terror of the Old Ones’ rule and then he throws in, a la Kim Newman and Alan Moore, joking references to Dr. Jekyll and Mr. Hyde and Dracula and Spring-Heeled Jack.

Clever in construction, effective in first impression but of fading appeal for me.

Agreed, for the most part. I'm not a big fan of pastiche in general, although I actually liked the faux-Victorian presentation of this online story. I like Gaiman's YA novels Coraline and The Graveyard Book very much, but his other non-comics fiction doesn't hold much appeal for me so far.

>12 RandyStafford: Gaiman eviscerates the real terror of the Old Ones’ rule

"Real"? Well, I think this observation touches a nub of genuine interest here: the imagining of a human society where the Old Ones have long held sway, and are publicly understood to be benevolent. (Even privately in some cases, as the healing episode demonstrates.)

Reading it from the other side, we might view this story as a satire highlighting the concealed monstrosity of the actual imperialist monarchies of Europe.

>14 paradoxosalpha: the concealed monstrosity of the actual imperialist monarchies of Europe

That's the reading I like, a tongue-in-cheek satire or social critique. From that vantage, I take the faux Victorian world Gaiman's built to be a cautionary tale, at least for readers. The arrangement seems benevolent, but we know better. Inevitably, the other shoe will drop. I think the reader is nudged into that reading with the switch in protagonists. Presumably most readers will "know" that Holmes and Watson are in the right, to be sympathised with, and they after all are opposed to this arrangement.

Since I couldn't​ find the online copy of this week's story, I dedicated the train ride to rectifying last week's omission.

I've read too little Holmesiana to get most of the references to that side. I did wonder about the narrator not being a doctor, but assumed that was a (pointless) difference between the timelines. When "Dynamics of an Asteroid" turned up I first thought Gaiman was going for the Moriarty-was-Holmes angle.

It was pretty funny nevertheless. I very much suspect that satire on monarchism - and a dig at people who romanticize the Victorian era - was intended, but Gaiman isn't heavy-handed about it.

I've played both editions of the boardgame: the 2nd is better.

(Apparently, rule by the Great Old Ones is bad for science - in our 19th century, the speed of light was by no means hypothetical.)

Adding the touchstone for the short story itself - A Study in Emerald - purely so I can about it.