Choco and I are both reading this while traveling, I in France, she in Cambodia. I thought I would open the thread here in a little cafe by Place Andre Malraux. I began my read on the plane. Must say, it's a sketchy little opening, with a bit of bonding in a Djibouti brothel. It does remind me of the wonderful Nizan screed Aden, Arabie in that opening, before moving on to channel some Heart of Darkness.

Quote from Chapter 4 "Must I fight shy of love because of syphilis? . . ."

I promised myself to make room for non-thesis-related reading at the start and end of each day--thus, I'm currently travelling virtually with a Frenchman as my guide, Marc Ferro in The Use and Abuse of History. Rick caught me eyeing it in his living room in Izola and decided to play book fairy, which is the sign of a class act. It's a good weird one: the project is looking at children's history textbooks to see how national history is presented to kids in various countries. It has that kind of Sorbonne-lecturey French social sciences style where you can imagine Ferro not preparing notes or anythng but just going into class, yawning mightily, and paging through the book in front of the students: "Let's see what we have here ... Armenia, well, this is a nice cover ... according to this Armenia is the oldest Christian nation in the world. In the world!" There's something Socratic about that, I think. In addition to Armenia, we have visited South Africa, "Black Africa," India, Trinidad, the Arab world, Iran, Turkey, Spain, Germany, the UK, France, the Soviet Union, and we are currently in early modern Poland attending a very frustrating meeting of the Sejm; still on the agenda are China, Japan, the American South, aboriginal North America, and Europe during World War II. He's a desultory but agreeable host.

Nobody abuses and has abused history as much as the French !

Well, history has abused them some too.

Med, your slang is incomprehensible : )

I say we not let French, English or Spaniards complain about history. Fucking imperialists. But can I whine a bit as an American?

Given that the Belgians, historically, are Frenched Dutchmen...(ducking)

I wonder how Japanese textbooks cover the first half of the 20th century.

Well, I have finished this story of a mass of misogynitic imperialist death-obsessed existential sado-masochists, and the gang was at least entertaining, if occassionally somewhat brooding.

I've got a bunch of notes on the various chapters, and am ready to start posting and discussing them whenever Choco starts to read. Curious as to whether we'll end up talking more about the literary aspect or the historical aspect.

Aw, sorry Sam! I finally got hold of it a while back, but then, as they say, "life got in the way" and I didn't end up reading it while I was overseas. But I am back now, and I should dig the book back out again, though I find it isn't what I was expecting, and I don't think I'm going to like it much.

Meanwhile, you know the face on the green cover of the version translated as The Way of the Kings? Well, that face is more grown over now; I happened to spot it at Ta Prohm. It's quite a small face, right down low, easily missed: 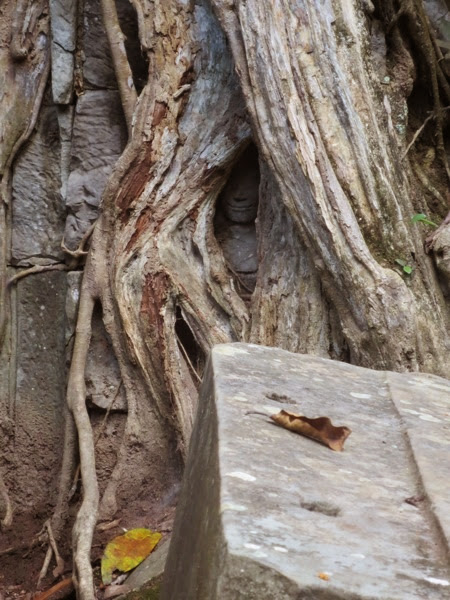 True, Mac. But maybe a little less so now that I am not there any more.

I've read the first two chapters. What charming fellers. So far we have: interracial masochistic eroticism; big money for bas relief carvings to be stolen from ancient temples; and death. Obsessions one, two and three - and we haven't even reached Asian shores yet.

I thought of long saws, so that we only take away the carved side, without going too deep: impossible. I have hacksaws, which are faster...

a single bas-relief, if it's a good one, a dancing girl for instance, is worth at least two hundred thousand francs... 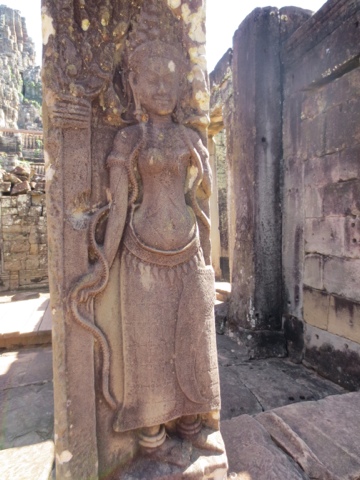 It get's even better : Malraux, once the Minister of culture of France was robbing the temples while writing the book. I don't know how good your Français is, but here is some more info.

When Malraux visited the Lascaux cave, he was not left alone for a minute !

I was taking some notes for the first few chapters on the plane. Here are some excerpts:

Well, isn't this just smarmy! Brothel bonding. What else would one do in Djibouti?

Then we find out all the cool kids fear death.

So the bastard is going to burden us with a plot? But we've met Kurtz already, haven't we? What do we need to slog through the jungle for?

Chapter 2 lays it all out. We pretty much know what's in store already. We're going to find trouble .... doom will be met!

Officious official grinding pen. Starting to like Claude fellow. Ready to charge into any melee, no matter how many warnings he gets.

Did you get a map in yours? A literal one? Cos I didn't.

Looks like you started out as unimpressed as I have been so far. We'll see.

No, just read the discussion of the map. It is interesting to have a novel with such a strong autobiographical voice who depicts himself so badly. Only a few do it. I think He liked the bad boy image.

That's true, yes, he is being unusually honest about his own ickiness. But as you say, I think he's proud of it.

His bad boy image got him book contracts

I can get lost in the various YouTubes listed below that, too. Great stuff. Much as he enjoys his bad boy persona, I think it also fits with him philosophically and with what he is trying to do here. The westerners in particular are pretty much all damaged goods here.

Finished Part 1. Seems to me that his philosophy in this book is something to do with taking tolerance to extremes.

Great video Mac, only my French is nonexistent. I had a good look through the other You Tubes too. Good stuff indeed.

So I finished it. It was one of the toughest slogs I've made it all the way through for a long time. I found no profound insights, only two guys bent on destruction of self and others for the sake of pursuing unhealthy obsessions.

Yes, well, there was that.

I think this is the old confrontation with meaningless, the Kurtzian "horror" of a dark spot in the center of ourselves. What good is the building of empires, the seeking of culture, the chasing of knowledge....

He has a dimmer view of westerners than of easterners. But I think as bad as these two boys are, part of what he's doing is contrasting them against the even worse folks who are on their way.

28: Curious that you should mention that. Two days ago I ordered Heart of Darkness, which I tried and failed to read as a teenager, and last night I watched Apocalypse Now for the first time. So this Malraux book has a similar theme?

Very similar. I would put both Apocalypse Now (which I absolutely loved) and Heart of Darkness above it for sheer quality, but it is probably more "readable" than either. Very breezy in places.

The other thing is this book is kind of full of Kurtz's, it's not that there is just one, and the bureaucrats dispensing machine guns top even the soulless Kurtz's for sheer evil here. Choco is right, these guys are bent on destruction of self and others to pursue unhealthy obsessions.

About apocalypse now :
Please do not watch the redux version, or director's cut.
Try to find the original one, the one that came out of the jungle...
Coppola screwed up his movie when he started tinkering with it.

29-31: I just saw the original film recently for the first time. I had read Heart of Darkness about 20 years earlier, and I didn't know how well I'd remember it, but I kept seeing those parallels. It is a very good movie.

That's enough colonial nihilism for me for a while, though, so don't think I will be picking up The Royal Way anytime soon.

Another book I really got into about the colonial experience and how it dehumanizes everyone was Burmese Days by Orwell.

31: The DVD from Netflix had both versions on it, and we opted for the original 1979 release. It was, of course, based on the Conrad novel, so that's why I paired them. Later I looked up reviewers' remarks on the lengthened and reworked "redux" version and thought we'd made the right choice.

I started this recently... Malraux's voice fucking annoys the hell out of me. Good early morning commute read.