Top 5 things to do before I leave Maine

Top 5 things to do before I leave Maine

After living in the Pine Tree State for the last 5 1/2 years, I'm moving out of state for a new job. So, what are the top 5 Maine experiences I should have before I leave?

(Realistically, I won't get a chance to do any of them, because I'm leaving in just a couple of weeks and I'm crazy busy with packing and other preparations, but maybe I can make a list for when I come back to visit, hopefully some time next year.)

Oh my! Where are you headed??

I'm off to Utah (where I'm from) to start a faculty cataloger position. It's a good thing, overall, but leaving Maine is bittersweet.

If there is any trace left of the Wilhelm Reich Museum at his old home between Rangeley and Oquossoc, you must see it. Really. -- Goddard

I hope by now you've circumambulated Jordan Pond. (But I wouldn't chance it outside of tourist season when other people are around, because I'd be afraid of a slip-and-fall and not be able to call 911. Last time I was out there, I wasn't able to make a good cell connection.)

Camp in Acadia National Park and drive to the top of Cadillac Mountain before sunrise to watch the arrival of dawn. Also, climb Mount Katahdin.

Oh, I'm sad and happy. I'm sure you know Maine better than I do, but I suggest The lobster place at Two Lights Park, on a summer evening...

Thanks. My new job will have a bigger budget for conference travel, so maybe I'll get to come to ALA and harass you. :)

When you come back, and I'm sure you will, go to the Schoodic section of Acadia National Park. The Schoodic Point surf against rocks is terrific at the right time when the tide is coming in, and any time there is storm activity in the area. It is one of the best parts of the Park, and hardly anybody knows about it. The road to it is off of route 1 beyond Hancock, in the town of Gouldsboro. Drive to Winter Harbor, turn left when you reach the "T" intersection at the ocean, and maybe in about 3/4 of a mile you will see a big sign on the right. The drive in and out is as good or better than Ocean Drive in the main Park itself. No fees, also. Stop at Ruth and Wimpy's restaurant on your way to or from... my favorite lobster place.

>13 Libncourt: Haven't been up to that area since the Ellsworth meetup back in September 2014, and I'm not sure I got to Schoodic that trip. I've done a fair bit of photography up in that area though in previous years. Here's my favorite from Schoodic from just about ten years ago, a gull posed atop a rock formation. I deliberately went out there with a lens hood on a misty day to get a "moonscape" effect. (Shot with a Canon Rebel XT DSLR.) 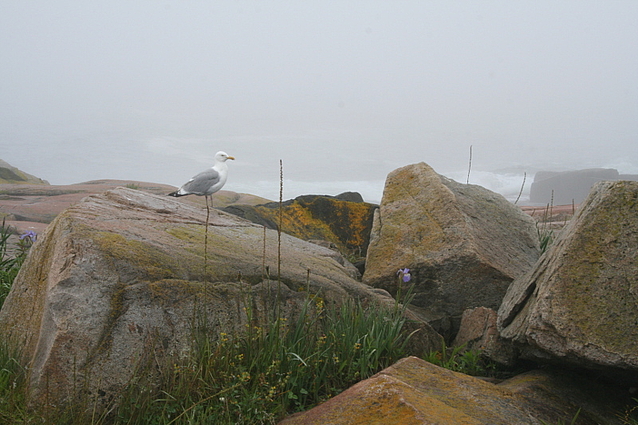 It's just a JPG and hasn't been touched up or light-adjusted from the camera raw file. I've got quite a number of shots of that gull differently "posed." He was quite cooperative!

My next trip to Maine has absolutely GOT to take in South Berwick for the Sarah Orne Jewett House. Good heavens, it's not even that far to go, right there in the southern tip of Maine.