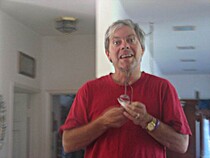 Om migI am an aerospace engineer with the Jet Propulsion Laboratory in Pasadena, California. I was born in April of 1957. I have a lovely wife my age and a beautiful boy born in November of 1998. I work on the Cassini mission in orbit around the planet Saturn as the manager for the attitude (pointing) control subsystem of the spacecraft engineering office. I previously worked for the Space Division of Rockwell International (now Boeing) in Downey California as a senior engineer for Space Shuttle ascent, insertion, on-orbit, and deorbit guidance, navigation, and control. I worked with John Young, one of only twelve men who walked on the Moon.

Om mit bibliotekIt emphasizes history, especially the history of exploration and the American West. Also science, technology, space flight, etc. I have some great books about the fight against political correctness. Also books about the importance of Judeo-Christian values in the world, and how misguided the "religion" of nature and other false gods are. I am quite well-read on the resurrection of Jesus, its historicity, and the amazing effect it had on so many people. I am a fan of the fur trade in the American West in the first four decades of the nineteenth century.

I am learning about English history, especially Tudor, Georgian, Regency, and Victorian England. I am also learning about the British Empire, the scramble for Africa, Churchill, and the two World Wars.

I like eBooks, and probably have way more of them than physical books. But my LibraryThing list is purely physical books. I just bought two used books on Amazon (my favorite way of buying books) and Amazon, even with a used book, has allowed me to read "immediately", as an eBook, one of the two books that I just ordered from a brick-and-mortar used book store! This is new and exciting to me.

I am learning about Shakespeare, as well as his plays. I am slowly gaining an appreciation of Hamlet and reading and watching great versions of that immortal play. I love Michael Wood's "In Search of Shakespeare" TV programs.