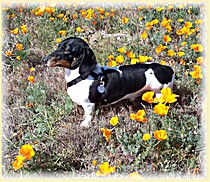 Om mig"To acquire the habit of reading is to construct for yourself a refuge from almost all of the miseries of life".
W. Somerset Maugham

I am a retired Human Resources executive having last worked for the California State University. I travel as much as I can and do human resources consulting for a major national upscale restaurant chain (About 5-10 hours a week!!!). Most of my leisure time is spent reading, cooking and baking (the best cookies, I am told) going to the gym, theater, Disney Hall, Ahmanson Theater,the Hollywood Bowl, the Music Center, movies, spending time with my two little piebald colored Dachshunds "Buddy" and "Alli" and museums.

Other involvements include La Sinfonica del Barrio, a symphonic orchestra bringing classical music to the Latino community. I received a Lifetime Achievement Award from the College & University Professionals in Human Resources (CUPA HR)and five time "Employer of Choice" Awards for contributions to HR and employee morale and benefits. Presently, Vice Chair of the Southern California Employment Round Table.

I got interested in reading at early age as a refuge from the barrio that I grew up in and in my teens joined a high school book club and met Irving Stone - Most recently I met Dominick Dunne at the first Phil Spectre trail in Los Angeles when I was a juror in the next courtroom. I brought all my unsigned Dunne books which he graciously signed and we spent about 30 minutes speaking "In the corridors of justice" which is the way he signed my 1st edition of The Two Mrs. Grenvilles.

Om mit bibliotekAs of November 2011 most of the library has been donated to university libraries and archives. I only have a about 50 books left including my favorites; Michael Cunningham -Home at the End of the World, Dominick Dunne 2 Novels, several unsigned James Baldwin, David Leavitt etc.

(My collection of GLBT first edition, signed first edition books has been committed to the University of Southern California (One Institute Archives - Donation 2011) and the rest of the collection of first and signed books have gone to California State University Channel Islands - John Spoor Broome Library (Architect - Sir Norman Foster - Pritzer Prize for International Architecture - Donation of the collection on September 8, 2008).