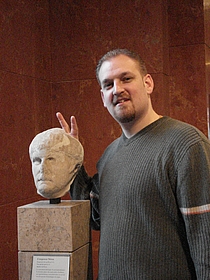 Om migJeremy thinks of himself as a testimony of God’s patience, mercy, and grace. He grew up in a Christian home and at an early age had the desire to pastor a church. With this resolve, Jeremy entered Bible College after high school and earned a B.A. in Biblical Studies. His postgraduate work has led to two Master’s Degrees and he is currently working on a Doctoral degree. Jeremy is not originally from Wisconsin; growing up in the Detroit area of Michigan has caused him to be an avid fan of the University of Michigan – a shortcoming the church is gracious to overlook as they seek to help him in that area. Previous ministries have included Jeremy pastoring in Rhode Island, and most recently in Illinois. He feels honored to serve the Lord at Memorial Baptist Church and is thankful for God’s mercy and grace that has been abundantly given to him. When not studying for a message or a class, he likes to spend time with his best friend and wife Anouk, as well as with their 3-year-old daughter Michaela, and their 7 math old son, both of whom they adopted at birth.

Om mit bibliotekEvery time I look at my books, I am thankful for the many voices of wisdom that are present to help me along the way.