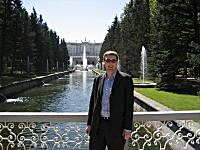 Om mit bibliotekMy books neatly sum up my life and interests and comprise in many ways an eclectic collection.

Broadly there are four main strands in here.

First off is a lot of history, primarily naval, with particular reference to the 20th century. Some date from the 1980s when I first started to get interested, most of them from the late 1990s and then a steady ongoing stream as my interest and time waxes and wanes.

Being honest, there's a lot of what I'll describe as trashy fiction, this is doing a disservice to a lot of fine authors, they're really much better than that - but there's still a surreptitious guilt about having quite so much that I have to tag as "murder".

As life's wore on I've had to earn a crust, and this has entailed engaging in grubby commerce - and in an attempt to dignify this I've acquired a moderate collection of business books, and strangely have discovered that a well written one can be enormously rewarding.

Finally, and thanks here to my wife, there's an array of cookery in here. These are trusted companions in the kitchen and have done much to make for pleasurable long evenings.

You'll find lots that doesn't sit easily in any of these categories, but I'm sure that's true of everyone, and all go to make us more rounded readers, collectors, and individuals.