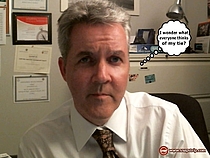 Om migI am the author of the time travel novel A Time and a Place. My short fiction has been published in Canada, Australia and Greece, and I've been nominated twice for an Aurora Award, one of Canada’s top awards for science fiction and fantasy, for my work on CBC Radio. I am a member of SF Canada, Canada’s National Association of Speculative Fiction Professionals

I have also worked as a story editor on multiple radio, television and film projects including CBC Radio’s Steve the First and Steve the Second, both seasons of Canadia: 2056, Canadian author and filmmaker Susan Rodger’s feature film Still the Water, and more.

I currently works full-time for the Canadian Broadcasting Corporation, where, for over more than three decades, I have worked in several roles including recording engineer, producer, and several operational management roles.

My second book, a collection of seven short stories entitled Other Times and Places, was published by Donovan Street Press in January 2020.

I live in Whitby, Ontario with my wife and two daughters, and our golden retriever and Siberian forest cat.

I can be reached at ilanderz@gmail.com