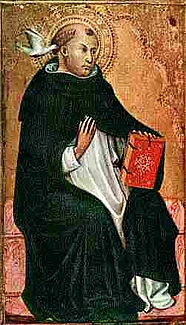 Om migI am a bibliophile who spends hours searching bookshops, colleges and libraries for Catholic books plus the occasional scientific work. When not on the road book hunting, I am studying philosophy and theology, volunteering at the only Catholic library in the city, reading my latest acquisitions, blogging about Catholicism, assiting at the Traditional Latin Mass, writing poetry or enjoying chocolate in its many forms with friends.

For those wondering, the image to the right is St. Thomas Aquinas, whose literary output was blessed with the gifts of counsel, knowledge and wisdom. As a Dominican Tertiary, I have a great love for his works but even more for his life.

Om mit bibliotekThe collection's current focus is philosophy, spirituality and theology of a Catholic persuasion, though you will find books by Anglican, Evangelical and Orthodox writers. There are a few ancient, antiquarian and archaic works which those in the know will recognise, particularly among some of the devotionals. Eventually the collection will also contain forays into cricket, history, mathematical amusements, poetry and science, though I am still deciding whether I should include engineering books from my undergraduate days.

Since I have aspirations to the priesthood or religious life, I thought it a necessity to have a well stocked library for my future preaching and teaching, as well as to wile away the few minutes one can spare from active ministry.