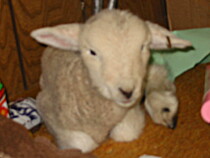 Om migI'm a farm wife with two almost grown girls, 7 cats, one dog, a barnyard full of sheep, turkeys, ducks, chickens and whatever other pets we happen to have. My interest in books stems from discovering the library in first grade - prior to that I had no idea there were that many fascinating stories in the world. The librarian tried her best to interest me in something besides Oz and Nancy Drew, but as you can see she had only limited success!

Om mit bibliotekAbout my ratings: 5 means I will read this again, probably often. 4 means I enjoyed the story and will likely read it again at least in a year or so. 3 means it was a good story and I might be interested enough to re-read at some point. 2 means I got through it but it was a struggle. 1 means I couldn't finish it, or only because there was nothing else to do. I am only keeping it because it has one or two good ideas, or it fills a set.