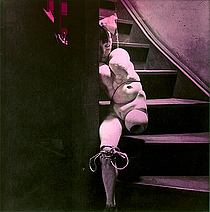 Om mit bibliotekSmaller than it used to be, but growing again. Unfortunately I don't have the space for much. So I keep it trimmed to the essentials and current aquisitions. I have a bunch of music books, including an overly large collection of guitar coffee table books. The rest is pretty broad. Though the mass markets are mostly sci-fi and horror. I find Clive Barker and Mark Leyner equally compelling, and am interested in religion as much as art. Its not a huge collection, but I got my bases covered ;) I'm also a bit of a manga and comic fan ... and due to the fact that it takes multiple volumes to finish a story at this point its about half my collection.