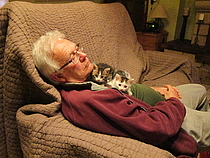 Om migBorn and bred in London, lived in a village in Derbyshire for 15 years and I am now retired and living in South West France in an even smaller village.

I Find myself becoming increasingly apalled by the consumer society that I am of course part of, however I do feel I have escaped some of this living in France.

Om mit bibliotekMy actual library is well over 1000 books, but I have decided to enter onto Librarything those books that I have read recently or that I can remember well enough to be able to rate/review.

Back in 2012 I started reading English literature from the bottom up as it were with Chaucer. Now in the Autumn of 2019 I have reached 1590 and I am starting on Shakespeare and Spenser.

I like to be reading a few books at the same time and so I will be delving into 20th century literature as well as recent crime/detective novels and science fiction and fantasy stuff. Most of these I read from my wife's recommendations. She reads faster than me.

I have an extensive music library which covers most musical genres: classical, rock, blues, jazz and world music. I try and find time to read and to listen to music, but not both at the same time.