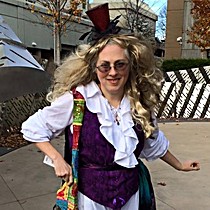 Om migHi, I'm an OCD reader and I always have to have a book with me. I'm a bit of an eclectic collector who will read just about anything I can find. I am also a collector of “Alice in Wonderland/Through the Looking Glass” & Lewis Carroll in general. Currently I have 23 different editions of Alice and 10 of TTLG (different illustrators, languages, etc.) My prize possessions are an 1896 edition of Alice from England and a First American edition (1872) of Through the Looking-glass.

I graduated college with a double major in French & English, so my collection is partially in French.

I believe people can (and do) have comfort books much like comfort food. I have a list of about 20-25 books that I will re-read when I am having a rough day/week to help perk me back up.

What I mostly read – I love the classics, esp. 19th century lit, as well as poetry, fantasy, horror, and mystery.

Salambo (Flaubert) – yes, it’s depressing but great if you want to be totally sucked in and not be able to think about anything else

Emma (Austin) – we all have that one friend just like her

The Oathbound (Lackey) – Yay for sister-hood and butt-kicking chicks

Summon the Keeper (Huff) – a funny little fantasy novel where Hell is a schizophrenic with MPD, cats talk, and anything is possible

The Winter’s Tale/Much Ado About Nothing (Shakespeare) – It’s Shakespeare! Do I need another reason

Om mit bibliotekIt's rather eclectic as I will read about anything I can get my hands on. I read English, French & Italian (working on German) so about a quarter of my collection is not in English.