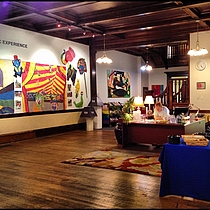 The William Way Community Center encourages, supports, and advocates for the well-being and acceptance of sexual and gender minorities in the Greater Philadelphia region through service, recreational, educational, and cultural programming.

The William Way LGBT Community Center was incorporated as the Gay and Lesbian Community Center of Philadelphia in 1974. The State of Pennsylvania and the IRS recognized the Center as a not-for-profit organization in 1976, and the Center quickly leased its first home at 326 Kater Street. The original Community Center offered a library, archives, classes, support groups, and a small performance space.

In 1981, the Community Center moved to 222 South Camac Street, along the side of the now burned Lincoln Apartments. After that second location closed in 1984, the Center spent four years as the “Center without walls” and continued to sponsor events in various venues in the city. During this time, Board meetings were frequently held in Bill Way’s living room. Starting in 1985, the Center became “Penguin Place: The Community Center Without Walls.” From 1984 to 1988, only the Library had its own space: a room that Penguin Place rented in the Community Education Center at 3500 Lancaster Avenue, near Drexel University.

In 1988, Penguin Place leased a building on Quince Street. The Center moved from this location following a fire in which some of the Archives were destroyed. From 1990 to 1997, Penguin Place was at 201 South Camac Street. In this new facility, the Center also offered a library, archives, youth program, peer counseling, support groups, and a free coffee house for adults. In the mid 1990s, Penguin Place expanded its mission to include people who are bisexual and transgender.

In 1996, after more than twenty years of renting, the Community Center finally bought a building: the present location at 1315 Spruce Street. The executive board named it The William Way Lesbian, Gay, Bisexual and Transgender Community Center. William “Bill” Way, who died in 1988, was a driving force behind the community center in the 1980s. In his capacity as a city planner, he was also heavily involved in the revitalization of Center City, including Old City and the Convention Center. Bill was one of the first high level city officials in Philadelphia to publicly disclose his HIV status.

The new William Way LGBT Community Center hired its first executive director in 1997 and began offering a wide array of volunteer-run programs, including peer counseling, a library, archives, Team Philadelphia. At this point in time, the Center also became a land-lord, renting space to nonprofit organizations. Some of the initial tenants included Metropolitan Community Church, POPEC, and GPPN.

In 1999, the Center hired Claire Baker as its second Executive Director, who had served as the Chief Operating Officer at MANNA. Under her leadership, the Center grew volunteer based programs, created policies and procedures, and developed the Center’s signature fundraising event, Indigo Ball.

In 2003, the Center hired `Dolph Ward Goldenburg, who had served as the Director of Resource Development for the St. Vincent de Paul Society of Atlanta and North Georgia. `Dolph’s fundraising skills helped the Center stabilize its funding base and hire professional staff to manage front desk, volunteer, and program operations. During his tenure, the Center hosted the first LGBT Inaugural Gala, revived the Indigo Ball, retired the mortgage, and invested over $200,000 in building renovations. Additionally, senior programming, Way Gay U, the art-gallery, the Archives, the Library, and volunteer-based programs have all expanded or been created during this period.

In 2010, the Center hired Chris Bartlett as its fourth Executive Director. Bartlett has over twenty years of experience organizing in the LGBT Community in Philadelphia, and had formerly served as Director of the SafeGuards LGBT Health Project, the Director of the LGBT Assessment of Philadelphia and the LGBT Leadership Initiative, and the Interim Director of the Delaware Legacy Fund. In his first year on the job he has focused on ramping up fundraising, expanding access to the Center and making use of new technologies to broaden awareness of the Center in the region and nationally.

Om mit bibliotekWith over 12,000 books available, our library contains one of the nation's largest collections of LGBT-related fiction and non-fiction. The Archives and Library are run as separate entities within the William Way Community Center. This collection does not represent the extensive Archive collection.

Registered Library users may check out books, and non-registered library users may browse the stacks and lounge in the lobby while reading the book. Users do not have to be members of the Community Center to use the library or to become a registered user.