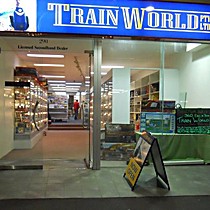 Om migTrain World commenced business at 615 Hawthorn road East Brighton in 1973. From a cabinet in a haberdashery store, Train World grew to take over half the shop in 1974 to take over the entire store and by 1977 it had taken over the shop and the rear residence. In 1981 the shop moved across the road to 624 Hawthorn Road East Brighton. Here too the shop grew and grew. So that by 1995 it had taken over the shop, the storage room area, the staff area, the garage, the rear warehouse and finally filling the entire building. Finally on 1st July 2012 Train world moved again to 290 Bay Street Brighton - Since the 1980s the focus of Train World has been trains and model trains, nothing but trains and everything to do with trains. Making it the largest pure train shop in Australia. Train World is a store of some 2,000 square feet. Open seven (7) days a week, that specialise not only in train models but new and used books and magazines of British, American and Australian titles. We usually have 7,000-8,000 titles in stock at any time. Plus we are the Australasian/Pacific Rim distributor for Irwell Press. We have a large holding of current and past new Irwell Press Books. On our home web site Irwell Press and our new / secondhand / used books are listed seperately. and can also be searched by clicking on the search link. We are displaying the covers and details for all our new Australian books and Irwell Press books on library thing.