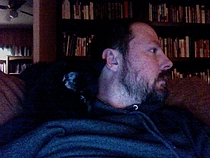 He is the author of Subterranean (Omnidawn Publishing 2018) (starred review Publishers Weekly), Tracer (Omnidawn Publishing 2009), and A Carnage in the Lovetrees (University of California Press, 2003), which was named a Book Sense Top University Press pick. His work has been anthologized in Joyful Noise: An Anthology of American Spiritual Poetry (Autumn House Press), The Arcadia Project: North American Postmodern Pastoral (Ahsahta Books), and most recently in Privacy Policy: The Anthology of Surveillance Poetics (Black Ocean). His poetry has appeared in journals such as Boston Review, VOLT, Lana Turner, LIT, Five Fingers Review, and West Branch.

Richard Greenfield began teaching at New Mexico State University in 2009, where he teaches in the MFA program as well as undergraduate courses in creative writing. In 2016, he was a Fulbright US Scholar Fellow and Distinguished Visiting Professor at Ewha Woman's University in Seoul, South Korea. In 2010, he was a Bates College Learning Associate. He has also been writer in residence at Kimmel Harding Nelson Center for the Arts, Willipa Bay Artist in Residence, the Atlantic Center for the Arts, and Seoul Art Space Yeonhui. Recent courses have included classes on the sonnet form, surrealism, prose poetry, and contemporary poetics. From 2011-2013 he was the director of the creative writing program at NMSU. He is one of the founding editors of Apostrophe Books, a small press of poetry, which began publishing books in 2007. He is currently editor in chief of Puerto del Sol.