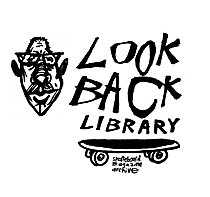 Om migKevin Marks, Founder: this journey began in September 1986 when I bought a Thrasher Magazine with Mark Gonzales on the cover. I've been collecting magazines ever since & over the years have developed a deep sense of wanting to preserve this form of communication. in 2015 I took on a pet project to improve the skate magazine library at Launch - Community through Skateboarding. that process led to multiple partnerships with other magazine libraries & collectors around the world. I was quickly swimming in doubles & the idea occurred to me that I should create a platform to build a myriad of other libraries from those duplicates.

Forrest, Cataloger: I found the Look Back Library while working on my Master's in Library Science. I Found myself regularly wanting to focus on skating instead of school, and decided to try and find a way to do both. I reached out to Kevin to see if there was any way I could help him out, and found that he had an incredible collection but needed a catalog to search it with. This is my attempt to help him out and to use my skills as a librarian to support skateboarding.

these links can help you learn more about what we do....

Skate Jawn post on documentary and tour - May 1st 2019