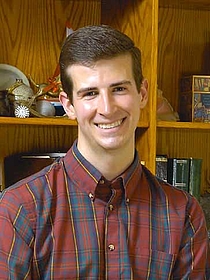 Om migI'm an applied mathematician working on my doctorate at the University of Colorado at Boulder. My research is in nonlinear waves and soliton theory. I hope to graduate in 2012.

I've also written a book, “Sous Vide for the Home Cook,” that was published in mid-2010. I became interested in sous vide cooking in December 2007 after reading a NY Times article by Harold McGee; I became obsessed with researching sous vide cooking and posted my now famous web guide, “A Practical Guide to Sous Vide Cooking,” in February 2008; after three major revisions and thousands of hours of work, my guide became the most respected reference for sous vide cooking on the web in 2009 and was translated into French, German, and Portuguese by my readers.

When I'm not studying a science tome I like to feed the other side of my brain with serious fiction and non-fiction — which, compared with advanced mathematics, always feels like light reading. I used to read pop fiction (like Chriton and Grisham) in middle school and I mostly read science-fiction and Greek philosophy in high school. I didn't read a lot of fiction during my undergraduate, except a little Annie Dillard and Toni Morrison. Now that I'm in graduate school I've started a more structured reading plan: I alternate between 19th- and 20th-century novels.

My last obsession was cooking with science. I went a little further than usual with this obsession and got some of my research published as the book “Sous Vide for the Home Cook.” Some of my previous obsessions — that I read very extensively on — have been typography and design, photography (mainly nature and wildlife), and endurance running or rowing (I also ran and rowed several marathons in addition to reading about them).