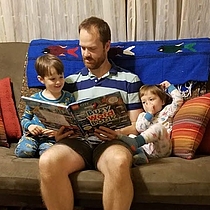 Om migI grew up at time when reading was encouraged through all sorts of faux incentives: rewards, prizes, points, etc. So, sensing manipulation however well-intentioned, I naturally avoided it whenever possible. I may have been young but I still didn't like being deceived, even by something as innocent as a gold star intended to spur action. It's a shame though because I love to learn. Always have. My teachers meant well, but they made reading feel so... obligatory. Fortunately all was not lost and I starting reading more for pleasure as a teenager. And after college once the assigned readings ceased altogether, I adopted reading as a regular daily habit. In a recent interview, author Nick Hornby said this of the cultural expectation that reading is like eating your vegetables: "Every time we pick up a book for a sense of duty and we find that we're struggling to get through it, we're reinforcing the notion that reading is something you should do but TV is something you want to do. It shouldn't be like that. Novels should be like TV. It shouldn't be hard work and we should do ourselves a favor." I agree with this sentiment 100%.

Our household now consists of two young, endlessly energetic boys so finding any extra time to read is challenging, but I consider it a priority so I squeeze it in when I can. You'd be surprised what you can make time for if it's important enough. My wife, a librarian, is also on LibraryThing. You can find her over at StefanieGeeks.

Om mit bibliotek★★★★★
I intend this rating to be thoughtfully given and deliberately rare. Good books are a treat but great books are hypnotic and seductive—you can't put them down. As my wife would say, "When I'm reading something this good, I don't want to do anything else." These are the stories of laughter, tears and wonder. These are the books that will change your life.

Furthermore, sometimes a book's brilliance isn't apparent right away. On more than one occasion I've concluded a great read on a frustrating note only to later realize its lasting value after returning to it again and again in my mind. When this happens, I upgrade the rating.

★★★★½
Books given this exceptional rating have moments approaching the sublime, and contain only minor problem areas if any. All in all, their worth outshines any shortcomings, leaving you with an experience that inspires for months and years to come.

★★★★
This is a nebulous category for the majority of everything I read. It's a ratings equivalent of saying, "I liked it." A good read.

★★★½ or ★★★
Books earning one of these two ratings are usually worth finishing, but often have structural problems such as being somewhat incoherent, disjointed or dreadfully boring. The most common fault in my experience is a serious lack of brevity.

★★½ and less
Sometimes I start a book that just isn't up to quality. Or maybe it doesn't gel with me personally. Author and literary critic Jorge Luis Borges would have said a book such as this was "not written for me." These ratings vary between "good try" to "ho-hum" to "should not have been published." My time on this earth is short and there are too many other good books out there waiting to be discovered.