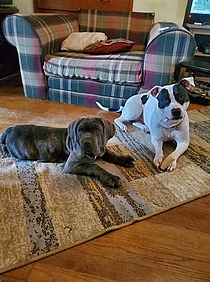 This is the part I hate the most, ask me to write a story about Dragons, Villans or Hero’s and I’ll jump right on in But ask me to tell about myself and I cringe. :/ Not because I don’t want to share about myself it’s rather I don’t know what to share and what’s too much. *Insert nervous laughter here*

So I’ll start with the basics I’m married to a great guy who is super supportive of my writing and is waiting for me to become his sugar momma. 😉 He bought me a brand new desktop computer and gave me his laptop so I had no excuses not to write. And bonus the kids are not allowed to touch my computer, oh right yes we have four kids, all teenagers *Groan* Seriously though our kids are great. Your typical phone and video game obsessed teens. We have four fur babies, Zelda, our pittie, Hades the Neo Mastiff and Jinx and Yashie the kitties. Life around our house is never dull! We live in a small and I do mean small town in rural Pennsylvania. Smack in the middle of some of the most history infused areas, like Gettysburg.

When I am not writing or spending time with my family-we go on drives during the summer and many weekend trips to our favorite spots including Ohio Pyle! Pennsylvania is gorgeous in the summer and fall and there is always something fun to do. Where was I? . Oh right when I am not writing I’m usually watching movies or playing video games. Yes I have a slight ok maybe not so slight video game obsession myself. I love unwinding with a few matches of Call of Duty or relaxing with a Legend of Zelda game. I’m almost always listening to some type of music, while cooking, writing or driving in the car. My music taste is very eclectic and my playlist can range from a Country song to a rap song to a pop song and then on to rock. But while writing I prefer folksy type of music like Shawn Mullins, Martin Sexton and Ray LaMontagne.

I started writing when I was twelve years old, at that time I was writing poetry. I remember the actual moment very clearly, I was sitting in my sister’s car with my mother and infant niece in the Century Three Mall’s parking lot. My sister had run inside to pick up something she had ordered and it was taking her way longer than expected to come back out. I had already finished the book I brought along to read and my mother had fallen asleep. Without any conscious thought I grabbed my notebook and started writing a poem about my baby niece. By the time my sister emerged I had several poems already jotted down and was addicted with writing. I won numerous school contests for my poetry and was even published twice in the Celebrate Pennsylvania’s young poets books. I wrote my first book when I was fourteen, it was a romance book about a woman on a ranch. My aunt read the entire book in two days and demanded more! I was so psyched and excited and I haven’t stopped writing since.

My first published book titled Ziron took me six years to finish writing! 😮 I know I know, that’s a really long time but I had three young babies at the time and barely could find time to write. It was published in 2011 and everyone I know bought a copy. The first time I signed a copy of my book was a moment that is indescribable, it’s kind of like seeing your baby for the first time after it is born. It was real, I was an Author!

Then life happened and all the stories I have partially or half written started to collect dust, I finished NanoWrimo in 2012 with a novel called Season of the Camero but I could never quite nail down the final chapter and so it too joined the pile of “To one day be completed’ 😥 Not long after that I entered a contest on DeviantArt and wrote a short story which was received extremely well and I was constantly asked for more of the story. I released each piece in chapters and then compiled them all together in one novel Haunting Echo’s A Mother’s Lament. So let’s recap, I have wrote a Romance at fourteen, then a Fantasy-Ziron, then a YA-Season of the Camero, then another dark YA-Haunting Echo’s. A friend of mine who enjoyed my books asked me if I ever thought of writing an erotica, I said I hadn’t. I wasn’t sure that was where I wanted to go with my writing, to this point I had saw myself as a YA writer and Erotica was not a YA genre. But the thought stuck with me and I found myself writing Forbidden, it was purposely kept short, to see the interest in it and to decide if I would continue on with Erotica. I haven’t decided as yet.

And then we get to my current book Nolan Wars, this book is by far the longest book I have wrote with over 106k words and I am pretty proud of that number as my previous books have all been between 32k and 58k. I started on a reverse harem, already 20k words in and I already know it's going to be over 50k words. It's the first in a series of four.

I'm very big in the bring each other up instead of knocking each other down movement. I support my fellow women no matter how successful/unsuccessful they are. I try to read as many books as I can in between writing. Not only to give other author's positive reviews but because I simply love to read.

Several of my books were published under my pseudo name Ryder Stone. It was a stupid idea and I will be rereleasing all my books under my original pen name of Corissa Neil.

I think I have completely covered the about me section, in fact I am sure I have over shared.